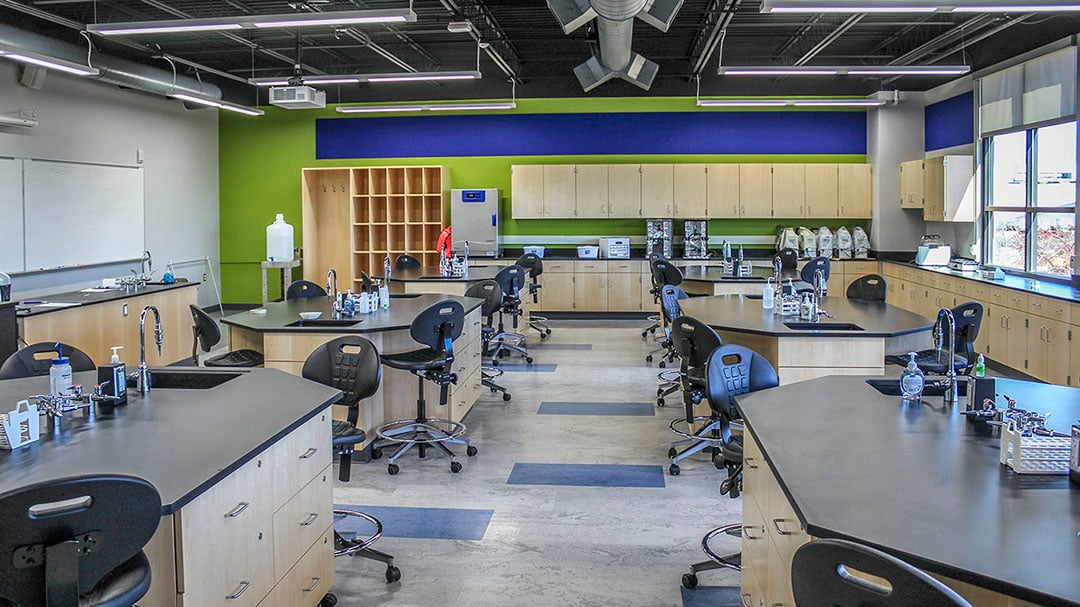 Our recent work for the University of Wisconsin-Manitowoc (UW-M) was both exhilarating and challenging. Not unlike, we imagine, the work that students perform there every semester in the laboratories, classrooms, and libraries at Founders Hall.

While we weren’t racing cars, it did seem like the construction version of “The Fast and the Furious.” Getting to the finish line in the transformation of Founders Hall was important and required rigorous attention to scheduling, materials delivery — and successful navigation of several challenges.

The First Renovations in Half a Century

The two-story UW-M Founders Hall, located at 705 Viebahn Street in Manitowoc, had not been significantly updated since its construction in 1962. While the scope of work required $4.4 million in general contracting services, the entire project encompassed $7 million in renovations, materials, and fixtures. The project included major work: moving the library to the first floor of Founders Hall, replacing windows that were long since boarded up, and updating facilities from the art studios to the science labs. Manitowoc County contributed $5 million to the project, the State of Wisconsin contributed $1.5 million, and private donations picked up the rest of the tab.

Everyone involved at UW-M, in the community, and the county was excited about the project plans, including University of Wisconsin System President Dr. Ray Cross, who said the renovations would “make it easier for students and teachers to form the connections they need in a space conducive to study, collaboration, and learning.”

An Ambitious Plan With a Tight Timeline 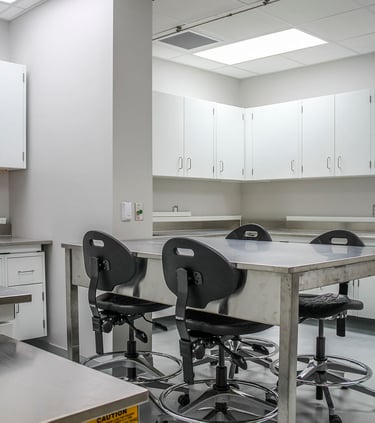 With a timeline for the project of less than one year, cooperation between the campus and the construction team was critical. Demolition began in May 2017 immediately following the end of the spring semester and continued through the summer months. Some classes met in temporary spaces on campus during the fall semester so that construction work could continue.

We officially began work on June 1, 2017 with a completion date of January 5, 2018. The project consisted of 28,460 square feet of interior renovations to the 134,500-square-foot structure. In addition to renovation of classrooms, administrative offices, corridors, and science labs, the library was relocated and common spaces were refurbished. Also required were mechanical upgrades, window replacement, and parking area resurfacing.

Other spaces in the school were repurposed and transformed into new spaces. Classroom lecture space was transformed into a nursing skills lab. Modern collaboration and lounge areas were added in areas that formerly housed long corridors flanked by classrooms on either side.

The original science labs and lab casework — now more than a half century old — were removed and replaced with modern laboratory design, casework, fume hoods, and seating.

All Parties Pitched In 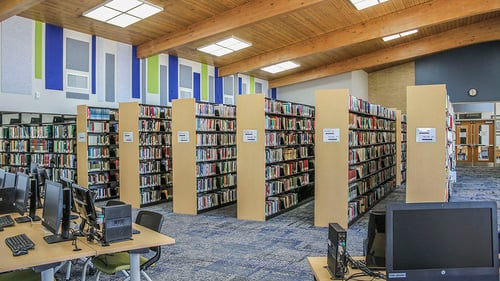 There were a lot of stakeholders involved in this project and everyone pitched in: University administration, UW-M staff, students, A.C.E. Building Service employees, and associated subcontractors and suppliers.

“Because everyone worked together, the project was completed for the beginning of spring semester classes,” said Martin Rudd, UW Colleges Regional Executive Officer and Dean. “We coordinated with the construction crews so that noise was kept to a minimum when classes were occurring. We had plastic sheeting blocking the main hallways and we used outside routes more than usual, but everyone was understanding and supportive of the very tight timeline for completion to benefit our students.”

No one worked harder than the library staff and a crew of volunteers, who packed up more than 31,000 items in its collection including books, CDs, DVDs and periodicals during the move to a more centrally located space on the first floor. The new library offers a variety of spaces for individual or group study — as well as beautiful views of Lake Michigan.

“The new library allows for students and the community to enjoy great books and media resources as well as comfortable study spots with beautiful views of the lake,” noted Mariah Zahn, a UW-M student and library staff member.

Click here to see more photos of this project >

Let There Be Light 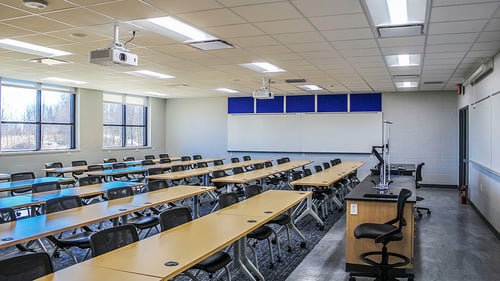 The newly-relocated art studios on campus are a big step up — literally — for the UW-M Art Department. “Studios once located in the basement, affectionately called “the dungeon,” have been relocated to a spacious, well-lit space,” said Berel Lutsky, UW-M Professor of Art.

Private donations were accepted to replace 96 windows in Founders Hall that were boarded up decades ago. These were replaced with energy efficient windows. Once again there is natural light coming into the labs and classrooms. This change alone transformed the look of the interior spaces — and reduced the need for artificial lighting.

At the height of the energy crisis in the 1970's many buildings, particularly education and government institutions turned to replacing large window areas with insulated panel systems,” explained Petska. “UW-M was no exception to this. Windows that were boarded up in the 1970s were opened back up and replaced with modern, energy-efficient aluminum storefront windows offering both views and natural light to learning spaces.

Every Project Has Its Challenges 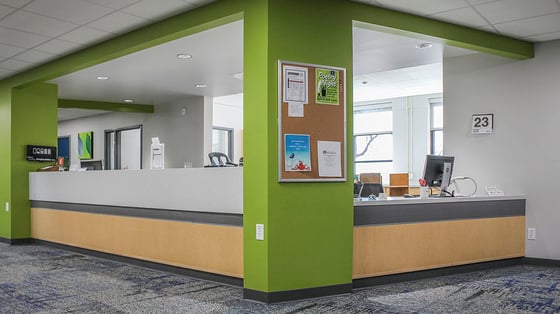 The first — and probably biggest — challenge on this project was the timetable, which required careful phasing. Phase one began immediately as classes closed in the Spring of 2017 and was completed prior to the beginning of the Fall semester, necessitating clockwork precision.

Another challenge popped up when we discovered that several existing building elements were not identified in the construction documents. They included building columns, mechanical and HVAC components, and structural interferences. We worked with our subcontractors to address these issues and to develop successful solutions while work was in progress.

The final noteworthy challenge involved the light fixtures for the new library space. Unfortunately, the fixtures specified in the project plans had extensive lead times. The problem was solved when our electrical subcontractor made a field modification to a similar, readily-available fixture that was acceptable to both the architect and owner.

One interesting development was that OSHA introduced new standards for silica in construction sites after this project was bid and before work commenced. We worked quickly to digest and understand the new regulations and requirements, implementing new company standards and educating our employees in a short amount of time for a project that had a high exposure to silica conditions.

A ribbon-cutting event and open house was held on March 7, 2018 for the renovated and beautified Founders Hall. The event welcomed students, staff members from across the University of Wisconsin system, and members of the local community. It was a well-attended event that showcased the renovation and the future potential of the university and its students. The event was extra special for me, because I am an alum of UW-Manitowoc, having earned my Associates degree in 1999. Always good to be back on campus!

“Your UW campus in Manitowoc is looking better than ever — come on over and take a deeper look at how these renovations provide just the platform for the outstanding learning that happens right here, close to home,” said Rudd. “The current and future generation of learners in our area will benefit from these new facilities and be well prepared to join the region’s workforce.” A.C.E. Building Service is honored to be a part of that, right here in our own home town.