A.C.E. worked with PetSkull Brewing to transform a structure that had sat empty for over 30 years into a brewery and taproom with lots of unique character. The renovation of the 113-year old building in historic downtown Manitowoc involved a lot of care and attention to detail. The goal was to enhance the space to meet the client's needs and bring everything up to code, all while maintaining as much of the historic charm as possible.

Many challenges are presented when renovating a building that is over a century old. Because of this, the project took over a year of planning before construction began. Several grant programs helped this project along, including a facade grant awarded by the City of Manitowoc to use historically accurate materials, colors, and building techniques.

Being that the building was very old, there were concerns about what we may encounter. However, as those issues came up, A.C.E. was able to quickly adapt and was able to maintain their project schedule and stay on budget. Supply chain issues were also prevalent due to Covid-19, however A.C.E. stayed in constant communication with their suppliers and this did not have an effect on our project.

The exterior walls of the building needed to be structurally reinforced and tuck-pointed. Additionally, decades of dirt, grime, and dust needed to be cleaned up. The building's cream city brick exterior was blasted with baking soda to remove the filth and discoloration, restoring the clean brick exterior from over 100 years ago. All of the windows and doors were replaced with historically accurate units to offer an appearance true to the construction methods of the original build time period. An exterior concrete patio was also constructed to offer additional outdoor seating and sunset views for patrons.

On the structure's interior, which also had to be soda blasted, original building elements were salvaged for re-use or preserved and rehabilitated as finish surface materials. Our team integrated modern elements like HVAC, fire protection system, ADA accessibility, a cooler, and a state-of-the-art brewery with the historical and original building elements to create a truly unique environment to enjoy craft beer.

It was fairly common in the original construction period to have wood floors that doubled as both structural and finish surfaces, as was the case with this building. Over a century of use and abuse left the original old-growth floors weathered and uneven. Knots protruded up from the floor surface from decades of wear, and some areas were partially decayed from repetitive traffic patterns. Rather than cover the floor up with a new material, we rehabilitated the floors and kept them as the finished floor surface. Our trade partner ground down high areas, filled in low areas with black filler, and applied several layers of polyurethane over the original wood. The result is truly stunning and a focal point of the interior space.

The new location allowed PetSkull to increase its brewing capacity and expand its taproom to accommodate more guests. We needed to maximize the footprint of the taproom while still allowing adequate room for the brewery and code-required items like ADA compliant toilet rooms and mechanical systems. To accommodate this, we utilized the basement level of the building for part of the brewery components that aren't visually appealing or areas of focus. We placed those that are on the main floor adjacent to the taproom.

In the 1980s, the building's original low-slope roof was covered up and converted to a conventional wood truss and shingle system. When this happened, the front and rear brick parapet walls were removed to ensure a weather-tight condition. To honor the original design of the building and make a historically accurate appearance, the parapet walls were re-constructed with new framing and cream city brick salvaged from other local demolition projects. A.C.E. installed a low-slope standing seam metal roof, black roof trim accents, and custom-made faux parapet cap handcrafted from prefinished metal. All of these items combined brought the exterior appearance of the building back to its original state.

From day one, A.C.E. clearly communicated the different options and showed us renderings of what those options might look like. They left no stone unturned and ensured that every potential decision we needed to make was determined with all the information, data, and guidance needed to get it to look and function as we wanted and needed it.

As every day went by, more and more came into focus and ended up being a very enjoyable undertaking. Each member of the team that worked on the job site ended up being true friends and we absolutely knew they had our best interests at heart.

Get a more in-depth look at how this project went from conception to completion in this video produced by the talented video team at Vagabond Creative Studio. 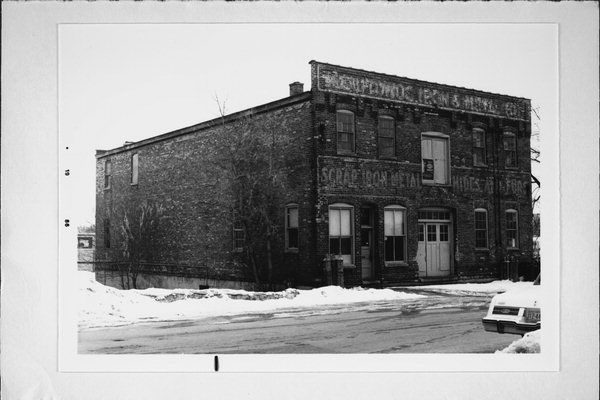 Picture of the original building from 1985 in historic downtown Manitowoc. 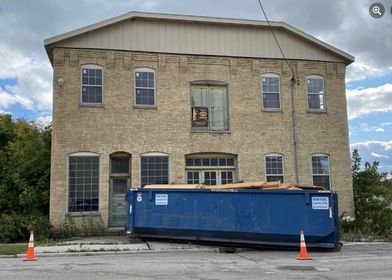 The structure had sat empty for over 30 years. 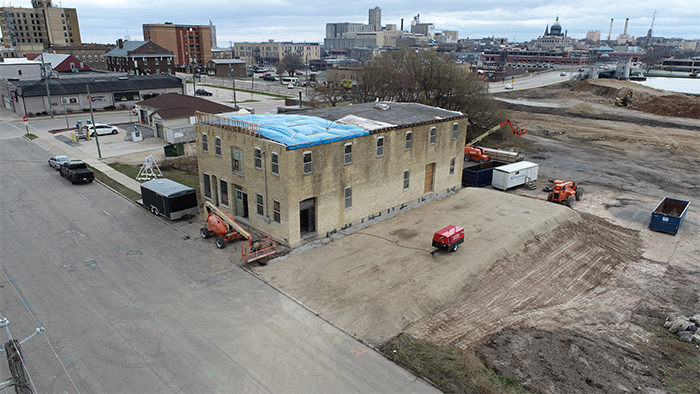 An exterior view of the in-progress renovation of the building. 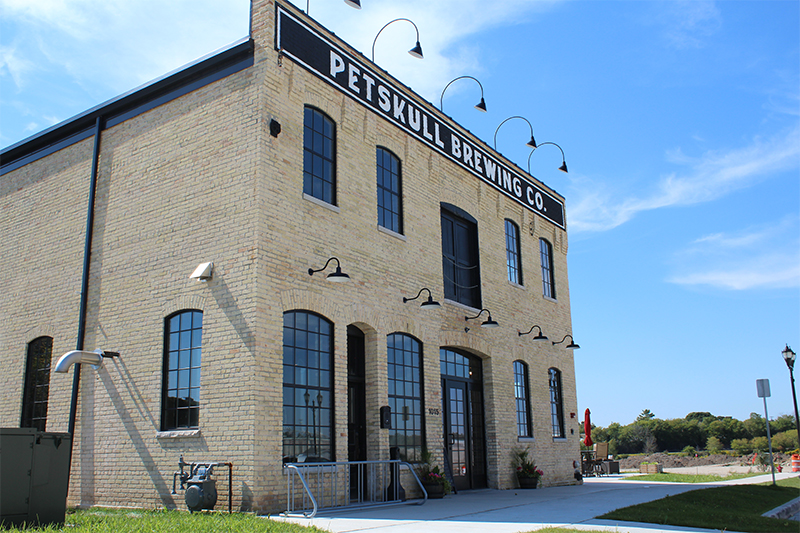 A facade grant awarded by the City of Manitowoc allowed us to use historically accurate materials, colors, and building techniques. 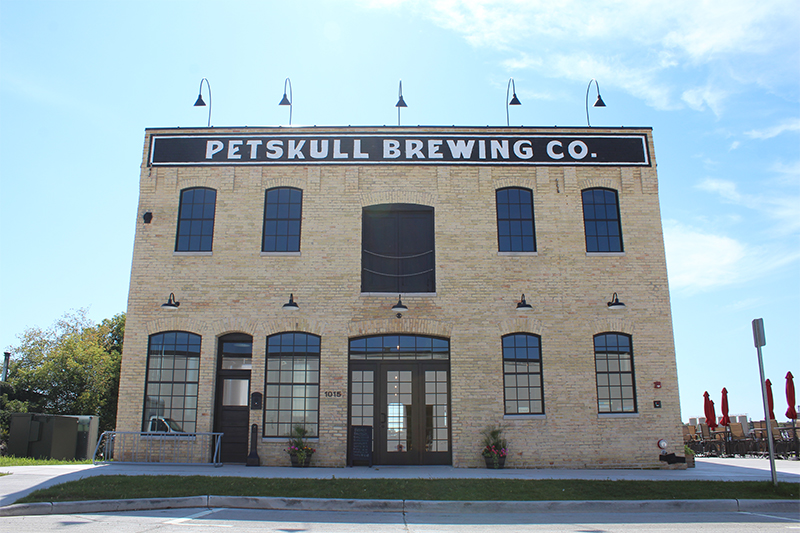 The building's cream city brick exterior was blasted with baking soda to remove the filth and discoloration, restoring the clean brick exterior from over 100 years ago. 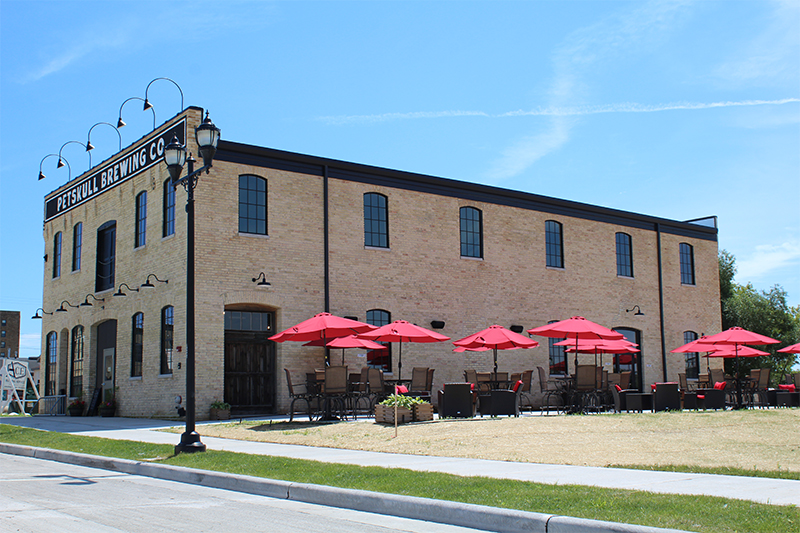 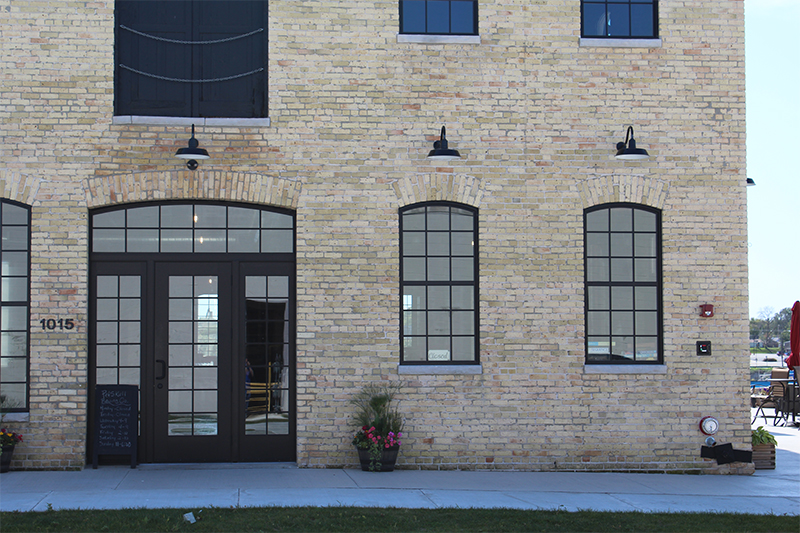 All of the windows and doors were replaced with historically accurate units to offer an appearance true to the construction methods of the original build time period. 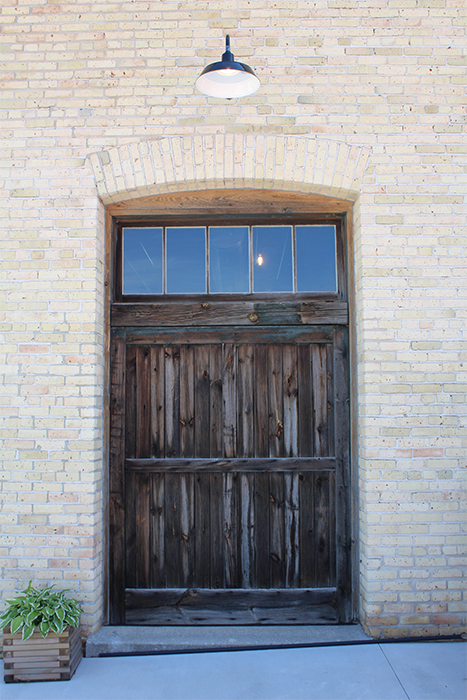 Historical and original building elements were used in this construction. 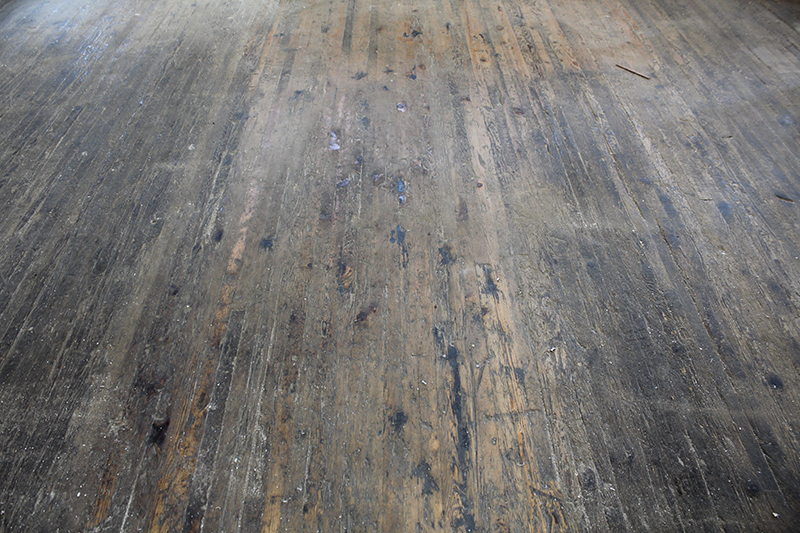 A before view of the original floors. 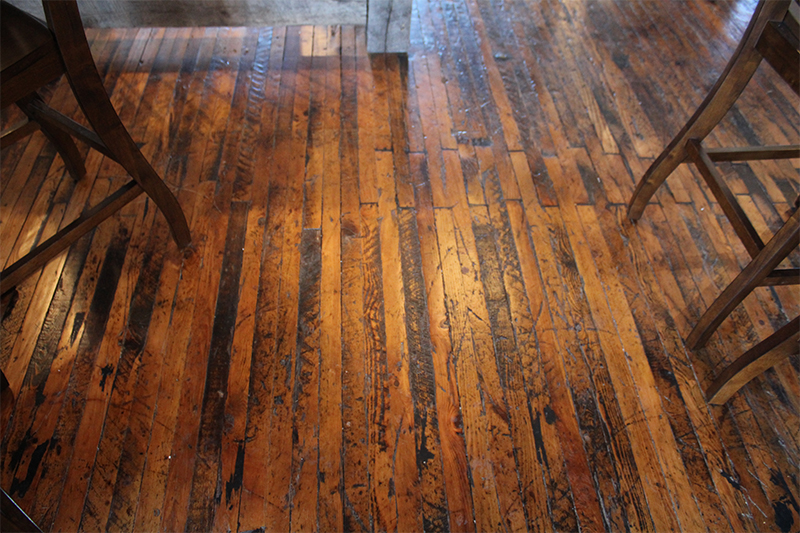 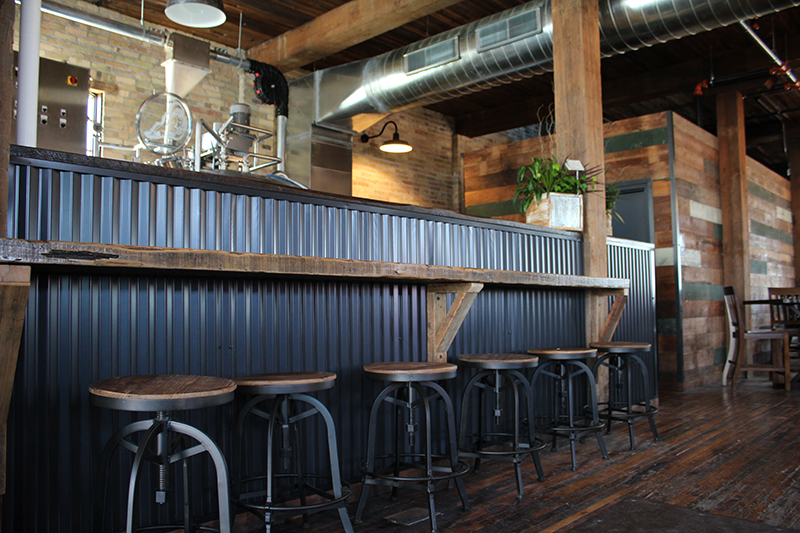 The new location allowed PetSkull to increase its brewing capacity and expand its taproom to accommodate more guests. 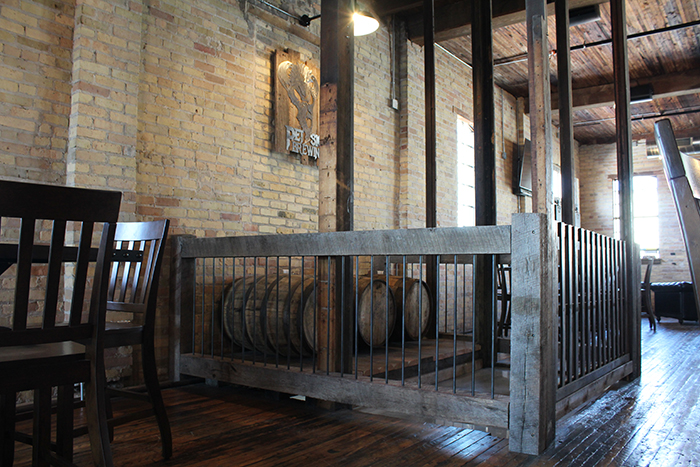 The goal of renovating this 113-year old building in historic downtown Manitowoc was to enhance the space while maintaining as much of the historic charm as possible. 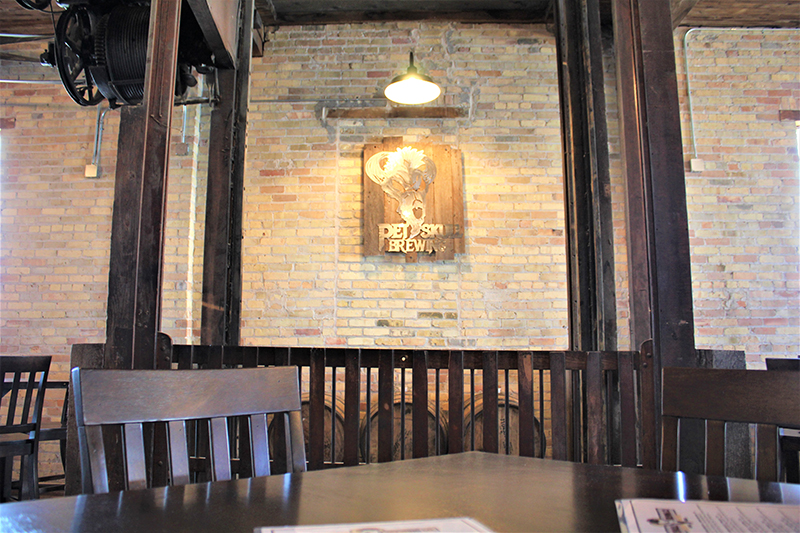 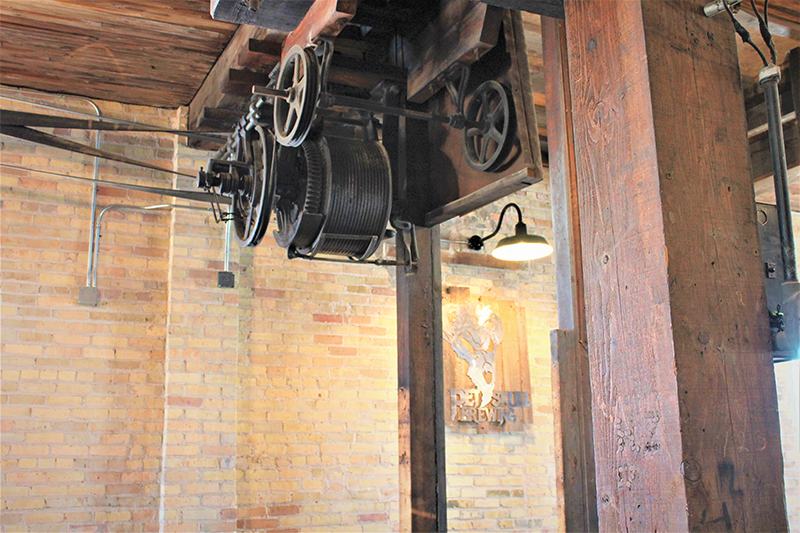 On the structure's interior, original building elements were salvaged for reuse, preserved, and rehabilitated as finish surface materials. 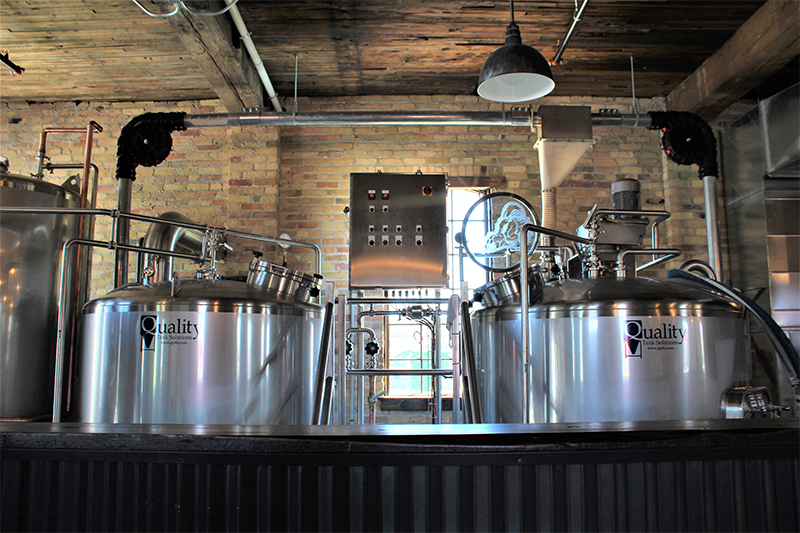 A state-of-the-art brewery was incorporated with the historical and original building elements to create a truly unique environment to enjoy craft beer. 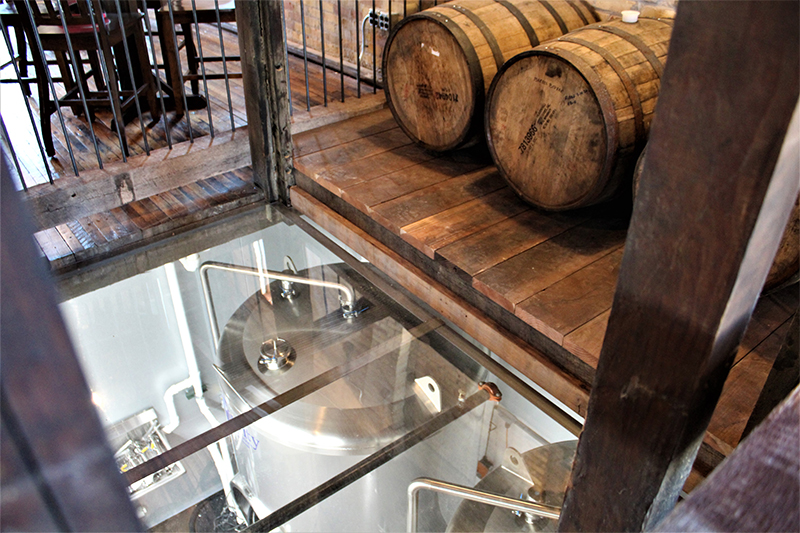 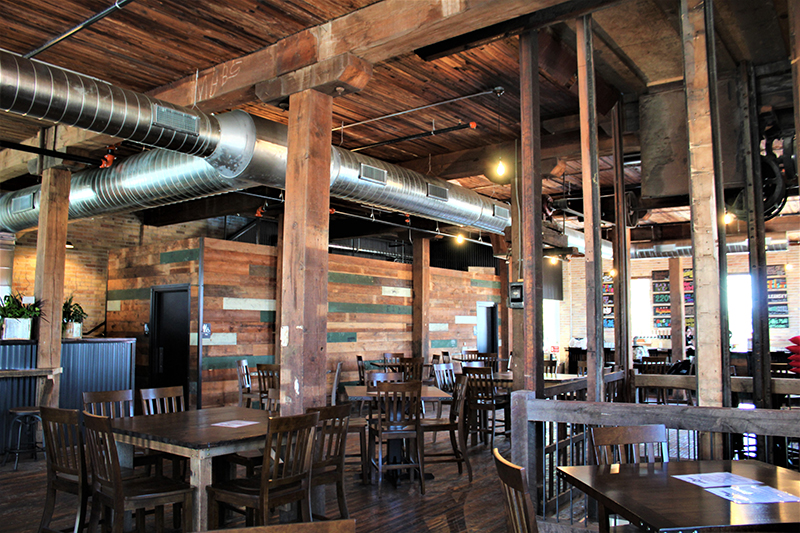 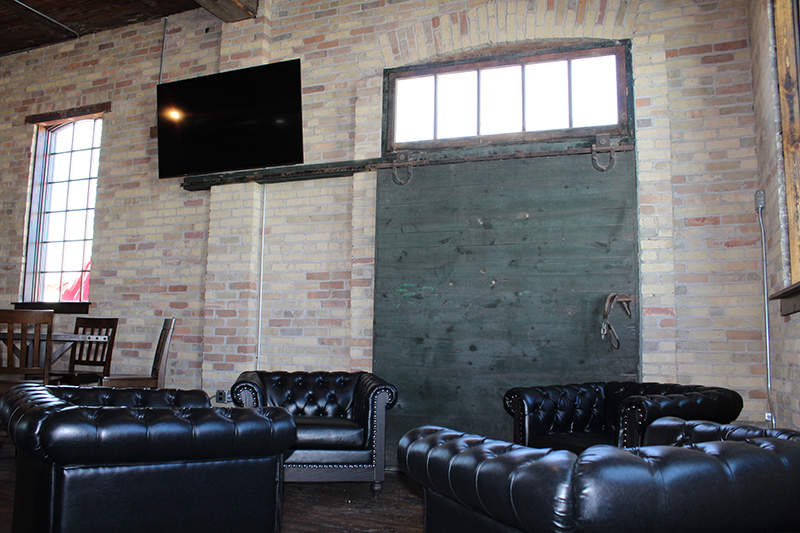